Bitcoin, the first generation of blockchain, was created to eliminate a central authority in verifying transactions and introduce to the world a highly secure decentralized cash system. Due to its simple design, it is very secure but the Bitcoin blockchain was not modifiable and had few uses outside payments.

Then came Ethereum in 2015. Ethereum is commonly called a second-generation blockchain It is created as a platform for deploying smart contracts and decentralized apps. One of the key features offered by Ethereum is its smart contracts capability, which could fast-track digital payments and execution of agreements automatically when certain conditions are met. This enabled users to exchange money, property, shares, or anything of value in a clear, conflict-free way and still avoid the need for a central authority. Ethereum has become a towering network and a hotbed for decentralized finance (DeFi) and non-fungible tokens.

But Ethereum has run into such problems as high gas fees and scalability. Essentially, whenever you want to send ETH you have to pay a transaction fee in order for it to be completed. The average gas fee right now is more than $20, and some users have reported paying thousands in fees. The smallest tasks on Ethereum have become very costly because of these gas fees. 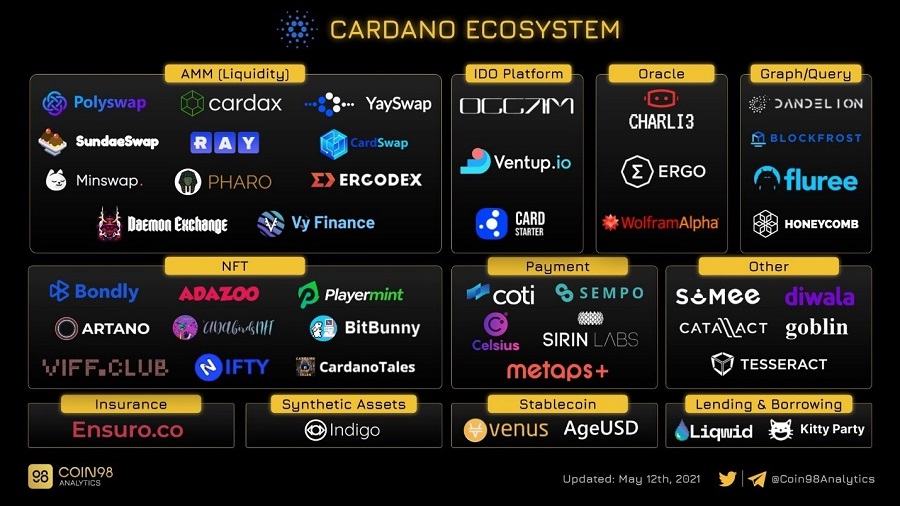 Enter Cardano’s ADA, considered the third generation of blockchain. Cardano is a public, open-source blockchain for building and running smart contracts and other decentralized protocols. The project was built from the ground-up by a team led by Charles Hoskinson, a co-founder of Ethereum. Cardano is a proof-of-stake blockchain. PoS systems allow miners to mine or validate block transactions based on the amounts they hold. The cryptocurrency was founded in 2017 and uses the token symbol ADA. Cardano is now one of the most prominent blockchain platforms that came after Bitcoin and Ethereum. Third-generation cryptocurrencies take the lessons learned from Bitcoin and Ethereum concepts and improve upon their shortcomings. Cardano is based on the Ouroboros proof-of-stake blockchain protocol, which is claimed to be four-million times more energy-efficient than Bitcoin (BTC). In short, the resulting energy difference is akin to the difference in energy usage of a household and a small country. Cardano utilizes new developments such as layered architecture to improve scalability, security, and sustainability. In this way, they create more usefulness, address flaws, and rectify inefficiencies.

ADA is coming after Ethereum. Much anticipated, Cardano’s ERC-20 converter is nearing the testnet phase. ERC20 token is a standard used for creating and issuing smart contracts on the Ethereum blockchain. Analysts see the ERC-20 converter as a critical component in competing against the number one smart contract platform, Ethereum. Crypto analysts expect the ERC-20 converter to entice significant numbers of Ethereum developers to jump ship and join the Cardano network. Once deployed, users of supported Ethereum tokens will be able to bring them over from Ethereum’s congested network and take advantage of Cardano’s transaction capacity and lower fees, while enjoying enhanced security, reduced cost, and interoperability.

Our forecast on ADA is extremely bullish, if there is strong migration from Ethereum platform especially with the defi apps and NFTs (non fungible tokens), sky’s the limit for this 3rd generation blockchain.