Junk Bond ETF outflow, is this Canary in the coal mine?

The high yield corporate bond market estimated to be worth near $1.5 trillion dollars may signal trouble ahead. When asset managers smell fear and become risk averse the first thing they examine is the high yield market or so called “junk bond market.” This is the segment of the financial market where America’s most indebted companies with low credit ratings are traded. Junk bonds represent bonds issued by companies that are struggling financially and have a high risk of defaulting or not paying their interest payments. Without the Fed’s intervention in March, the high yield market, especially so called “Zombie Companies” would not have survived the market melt down, It is estimated that nearly one in every five publicly traded US companies is considered a zombie company according to data compiled by Deutsche Bank Securities. A zombie company is a company that needs bailouts in order to operate, or an indebted company that is able to repay the interest on its debts but not repay the principal. In April, the federal reserve chairman Jerome Powell announced that he is willing to rescue the corporate bond market and was willing to buy up to $750 billion. So far, the Fed has bought close to $13 billion which is a fraction of the $750 billion they were willing to spend and now the record shows the Fed has seized buying corporate bonds altogether. The high yield market participants are clearly jittery and frightened by the prospect of no more Fed buying, all you have to do is look into the biggest exchange traded fund for high yield corporate bonds which is the ishares $ High Yield Corporate Bond Fund, HYG (see below). The HYG was hit by nearly $1.06 billion of outflows recently, the largest single day outflow since the start of Covid 19. This clearly shows investors are becoming risk averse and maybe flight to safety will be the theme until Jerome Powell makes his next move. Maybe market is selling off without the additional Covid 19 fiscal stimulus bill or the prospect of worsening Covid 19 or maybe it’s the upcoming presidential election jitters, whatever it is, the widening credit spread from the narrowest point August 3rd to widest point on September 21st is very telling that Market RISK has risen considerably from the September 2nd when S&P 500 hit all time high of 3588. 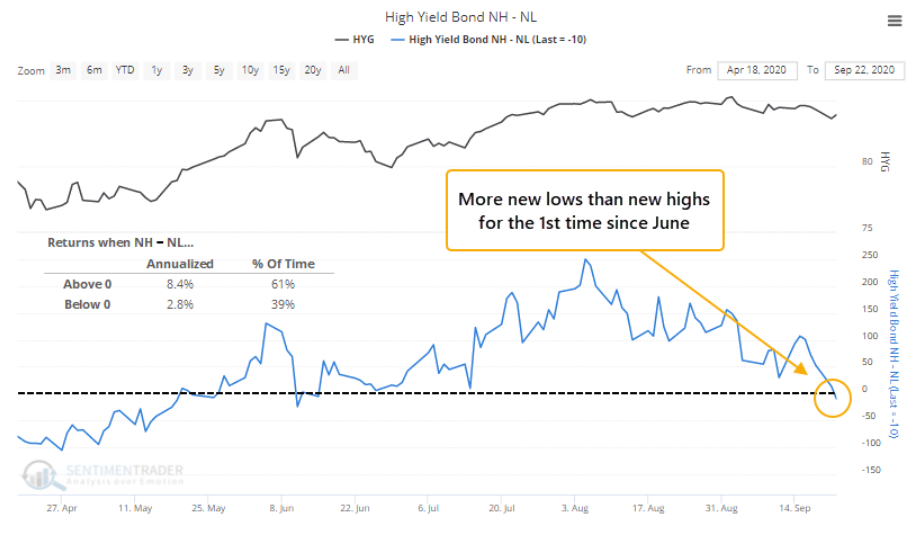